In my previous life as a primary school deputy headteacher it was my job to lead a weekly school assembly. On one such occasion I was a tad unprepared and grabbed an assembly story book on my way to the school hall, my class in tow.
As the assembled listened I read a story. It was about a woman in a village complaining to the elder about her house being too small. The elder told her to go home and put all the cows in the kitchen, the sheep in the living room, the pigs in the bathroom and the chickens in the bedroom. The woman returned home and did this, returning to the elder the following day. She was told to let one animal out each day. Over a period of time the woman did just that - as she did so she felt she had a tiny bit more space. As the animals were let out the feeling of getting more space increased until her house was empty and she was left languishing in the space....no longer feeling the house was small.
As I read the story then, and as I recollect it now it made a great deal of sense especially with our current circumstances. Our house looks like a building site and will continue to do so for the next few months, but as we tackle each project we will have our sights set on what it WILL be like in a few months time.
I currently am working in a kitchen which is a nightmare - but it is clean and in a few weeks my cupboards will look like this 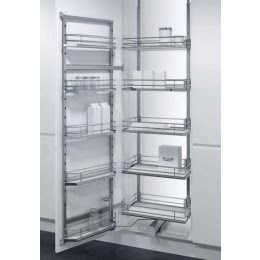 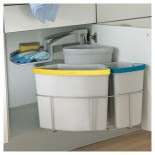 and I will have a place for everything!
For more ABC Wednesday fun follow the link on my sidebar.
Posted by mrsnesbitt at 12:29