Dadaaaaaaa! (As in DRUM Roll!) 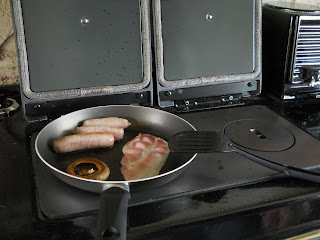 A couple of hours ago - the very first breakfast cooked on the Rayburn! This was Jon's suggestion - I said it is ABC theme and it must contain a letter "D" so he came up with TuesDAY's breakfast! Hmmmm!
Although it is summertime and apparently August,  the weather leaves a lot to be desired and we have lit the Rayburn! Originally we  tested it out so that when the colder months came along we would know what to do in a relative short space of time - but the weather has taken a definite turn for the worse and we needed to keep warm, hence the rayburn being on. We are still in the experimental phase - Jon is trying out a variety of fuel - mostly logs during the day and a mixture of logs and coal during the night, I am getting use to cooking with it. I have roasted a joint of pork and made a chicken curry - both quite nice, even if I say so myself.
It seems quite a while since we were actually warm throughout the house and I am so pleased we had the Rayburn fitted when we did - nobody anticipated this drop in climate. Jon is currently modifying the set up so we have an independent pump feature - not sure as whilst he was explaining the technical details to me I was lost in the translation! A typical occurance in the everyday life when married to an engineer!

For more ABC fun - visit the link via my sidebar.