C is for Cooking with Mrs Nesbitt

B is for Bang! Big bang.

One thing I use my blog for is a point of reference. A few weeks ago we were sitting in the snug when there was an almighty BANG from the kitchen, blowing the tripper switch in the fusebox. When we went into the kitchen there was a horrible smell coming from the laundry cupboard - from the washing machine. Jon asked me how old it was - by looking on my blog  Here I was able to tell him it was just under 3 years old. The problem was inside the motor - the commutator to be precise (Jon's analysis not mine!) Jon fixed it but it was a temporary measure. Whilst we paid £169 for the washer a new motor would be £120 but the motor was a cheap inferior one. Trouble with a motor malfunction is that it can cause a fire. We decided to look in the sales and go for a Hotpoint. We were pleased with £229 - a mere difference of around £60 but with 10 years parts warranty we felt this was a good buy. Jon is familiar with Hotpoint but let's hope it wont come to that.

It is very quiet! 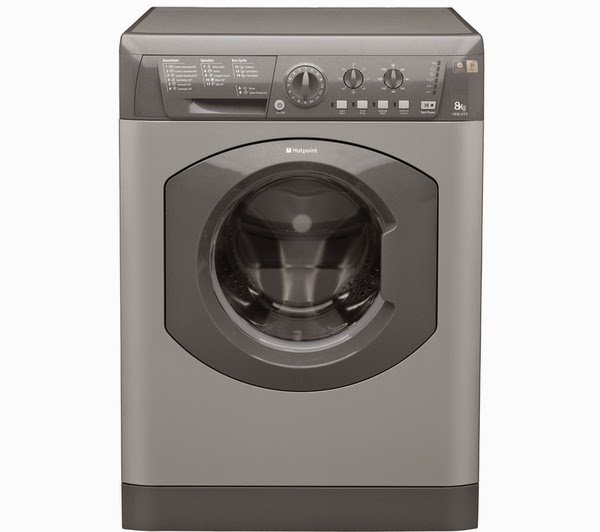 ABC Wednesday - B for Bang!
For more fun visit the ABC Blog - click on the link at the top of my sidebar.
Posted by mrsnesbitt at 11:23 18 comments:

Labels: ABC Wednesday, Day to day life in the Nesbitt household, Jon
Email ThisBlogThis!Share to TwitterShare to FacebookShare to Pinterest

You must try one of these! 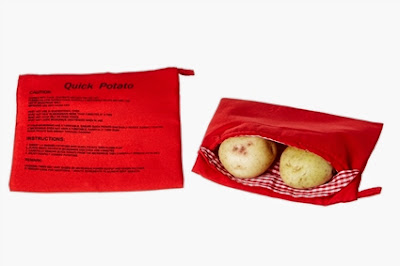 Just before Christmas I sent for a set of these microwave bags from one of the leaflets that came through the door. I gave one to a friend. The idea is to cook jacket potatoes. I didn't have great expectations but how wrong was I? Depending on the size and quantity of the potato(es) and a bit of experimenting perfect jacket potatoes are the result every time. At Christmas I experimented with some parsnips - cooking them in the bag for 5 minutes then putting them on a greased oventray(frylight) spraying with frylight and cooking for 20 minutes - they were awesome. Even Jon said they were the best he has ever tasted. Last night I washed and peeled a large potato - cut into chunky chip sizes - popped in bag in  microwave for 5 minutes - then put them on a greased oventray(frylight) spraying with frylight and cooking for 20 minutes- result - best chips I have ever tasted.
Crisp on the outside, fluffy in the middle - just like my mum use to make. 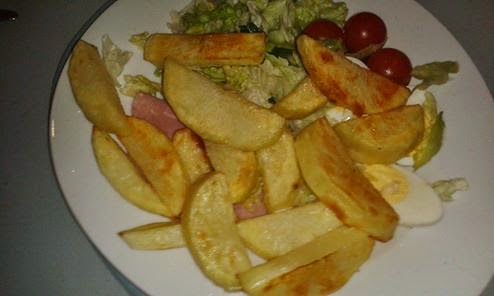 The bag can be washed and is ready to go!
Good news - I have found an online bargain! HERE!
﻿
Posted by mrsnesbitt at 16:00 8 comments:

Snow in the village.

I usually go to the beach every morning, weather permitting with Bing and Sadie. Bing is currently under strict orders from the vet, to take it easy. This is due to an incident on Boxing Day. We were on the beach and Bing was doing what he does best, chasing after his favourite ball. He was so focussed on the ball he collided with a little whippet. The clash sent him to the ground with screams of pain. He got up and walked okay but in the following days he would yelp if he moved his leg in a certain way. We took him to the vet and after a thorough examination was prescribed anti-inflammatory tablets. These finish today but tomorrow will be gentle walk - just round the garden....slowly building up to longer walks. I have been taking Sadie to the beach but following last night's snow I decided to take her up Handale Lane...she loved it. 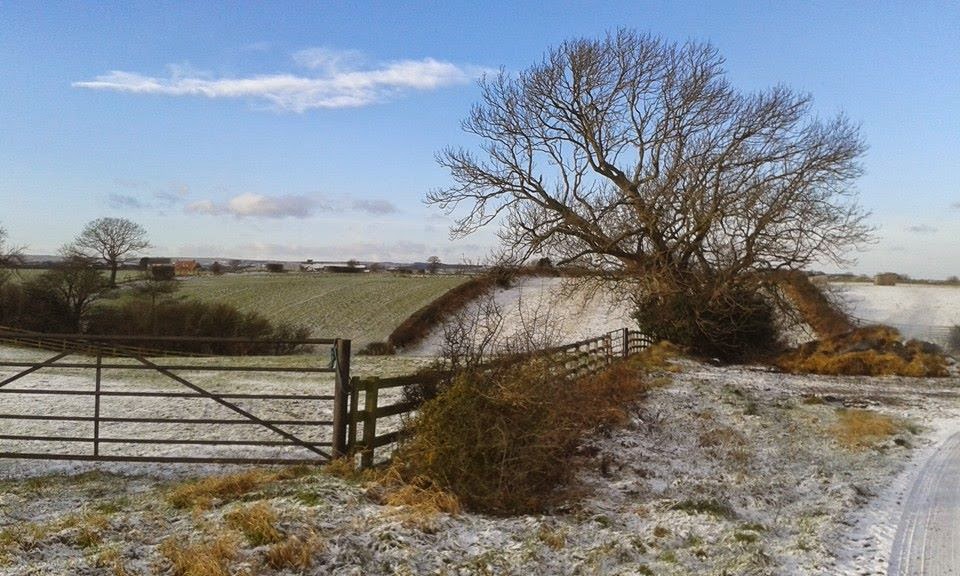 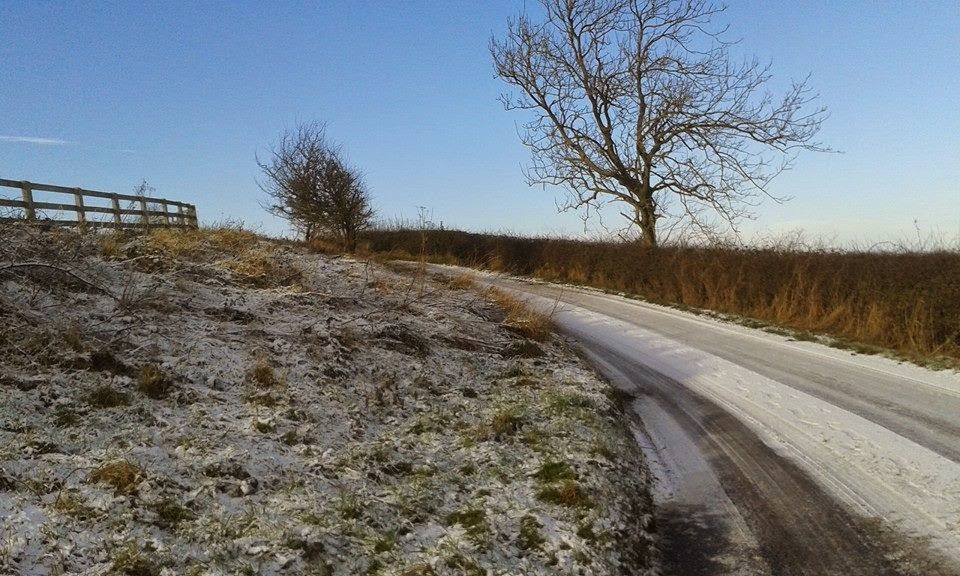 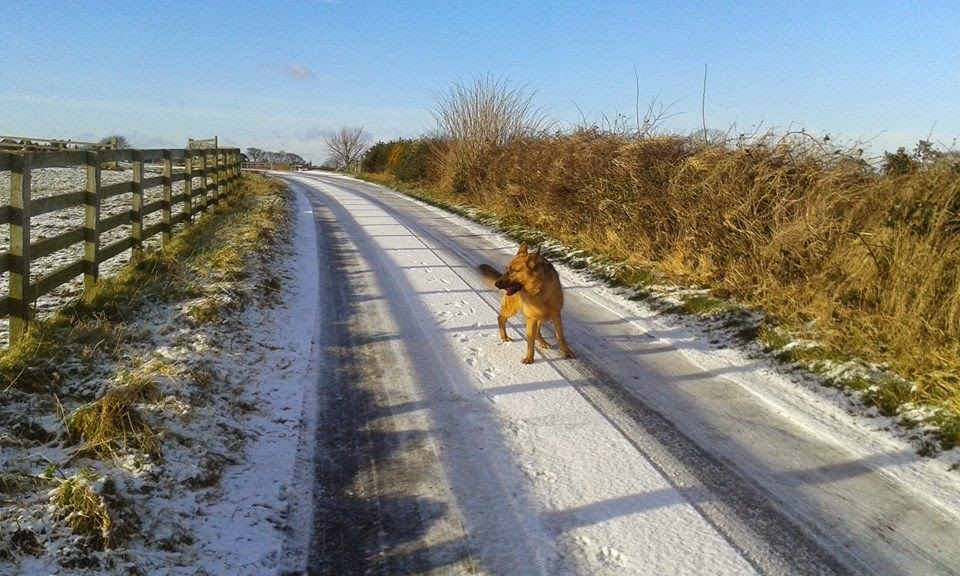 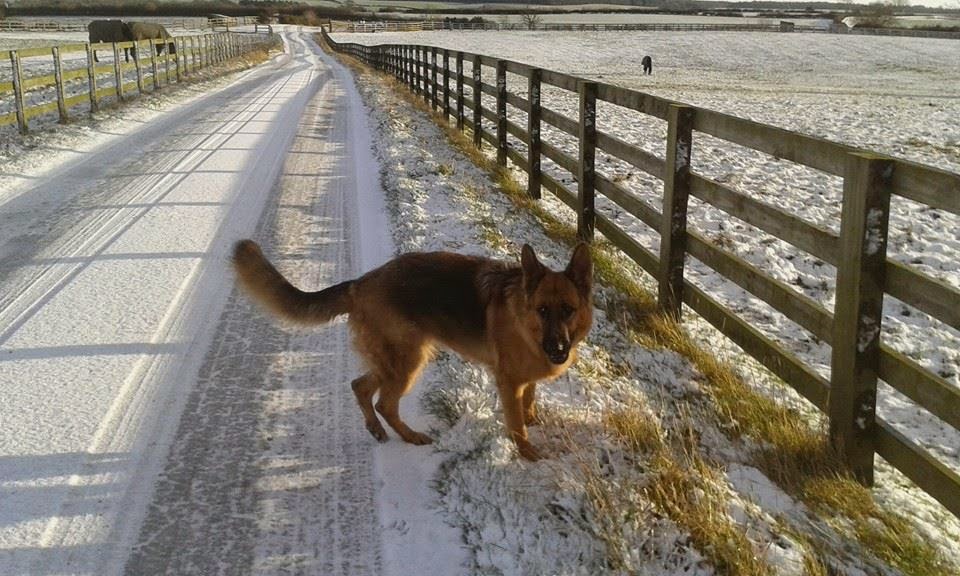 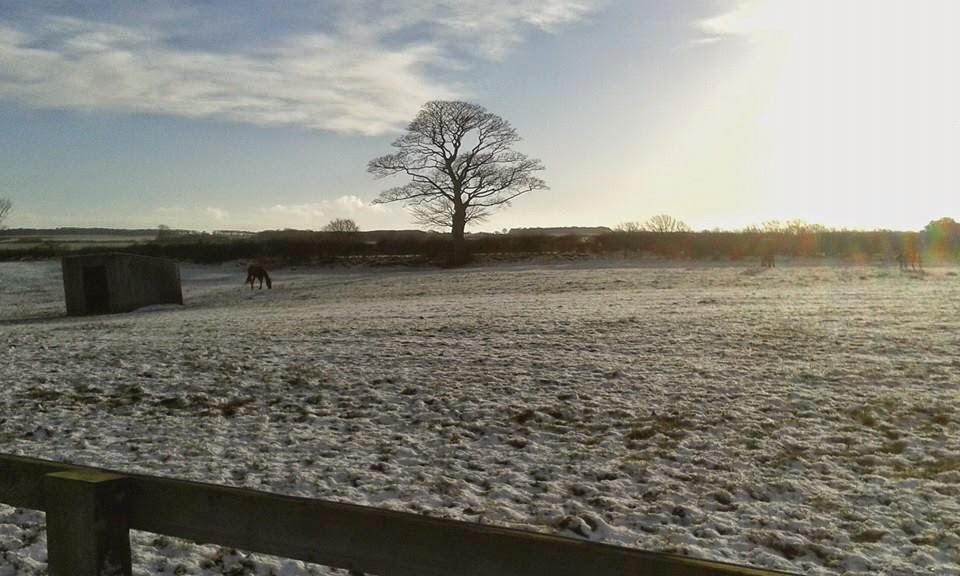 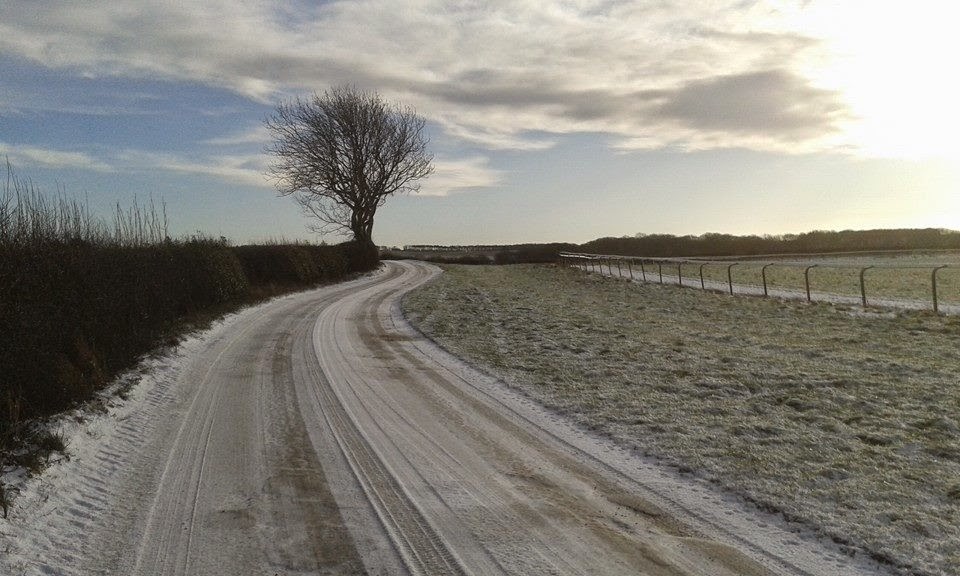 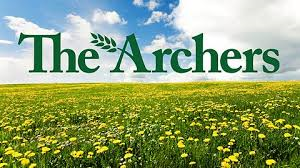 I've been quite busy of late, what with this that and the other but before we know it, ABC Wednesday is back for another round....16 would you believe. Basically a group of us post a weekly contribution with a particular letter of the alphabet. The group is scattered all over the globe and has been going for 8 years. I am humbled to think I started it off all those years ago and it is still going strong to this day, now with Roger  at the helm and a great team. myself just being part of the team.  Friendships have come about this project as well as visits and meet ups. I sometimes have a theme for each round - last round was based on my garden this round however I am just going to see what pops up!

A then has to be The Archers. I listen to this programme every day. We don't watch any soaps on TV, this is the nearest to it I suspect. We live in a farming community and I can identify with some of the issues. I listen to Radio 4 most of the time - I don't  like a quiet house and some music stations have a lot of adverts between the songs. Definitely a Radio 4 fan and most certainly an Archer's fan!

This is how the BBC introduce the programme.
First of all, what exactly is The Archers? Well, it's a radio soap opera set in the fictional English village of Ambridge. It aims to provide essential drama from the heart of the country.
So what does that mean you'll be hearing? Ambridge is a twenty-first century village, with all the pressures of modern rural life. You'll become involved in the characters' personal and business struggles, their love affairs and all sorts of village activities from saving the local shop to the annual fete. There are plenty of lighter moments too.
These characters then... Several of the main families are farmers. At the heart of the programme are David and Ruth Archer at Brookfield Farm. David once had cause to regret employing a handsome cowman, but they're pretty stable nowadays.
Their cousins Pat and Tony Archer farm organically at Bridge Farm. That's a dairy farm as well, but they also keep pigs and grow vegetables. They sell their own yogurt, ice cream and cheese.
At the opposite end of the farming scale are well-off Brian and Jennifer Aldridge at Home Farm, which is the biggest in the village. That little boy who lives there is Brian's son from a torrid affair. When his mistress died, amazing Jennifer agreed to take Ruairi in.
The Archer family is related to the Aldridges, and to several other Ambridge families, including the Hebden Lloyds - she runs a riding school and he's a vet.
If that all sounds a bit posh, there are lots of less well-off characters too. Most of them live and work in and around Ambridge - on the farms, in the local pub The Bull, at the village shop, at Grey Gables hotel or St Stephen's church.
Those sons of the soil the Grundys are particularly good value, both for the scrapes they get in and the fact that Emma Grundy isn't Ed's wife, as you might think, but the ex-wife of Ed's brother Will.
You can look up all the current characters in the Who's Who section of the Archers website.
By now, I expect you're keen to know how you can hear the programme, and it's very easy to start, because the episodes are only thirteen minutes long. They're broadcast on BBC Radio Four every day, Sunday to Friday at seven p.m. And they're repeated the next day at two p.m. - except on Saturdays.
Or if you want to catch a whole week's worth in one go, there's an omnibus edition, on Sunday morning at ten a.m.

Over on Facebook there are a few Archer's groups, I am a moderator  of the Ambridge Addicts Group. We discuss current story lines etc. and all in all often the drama far surpasses anything which occurs in the programme. 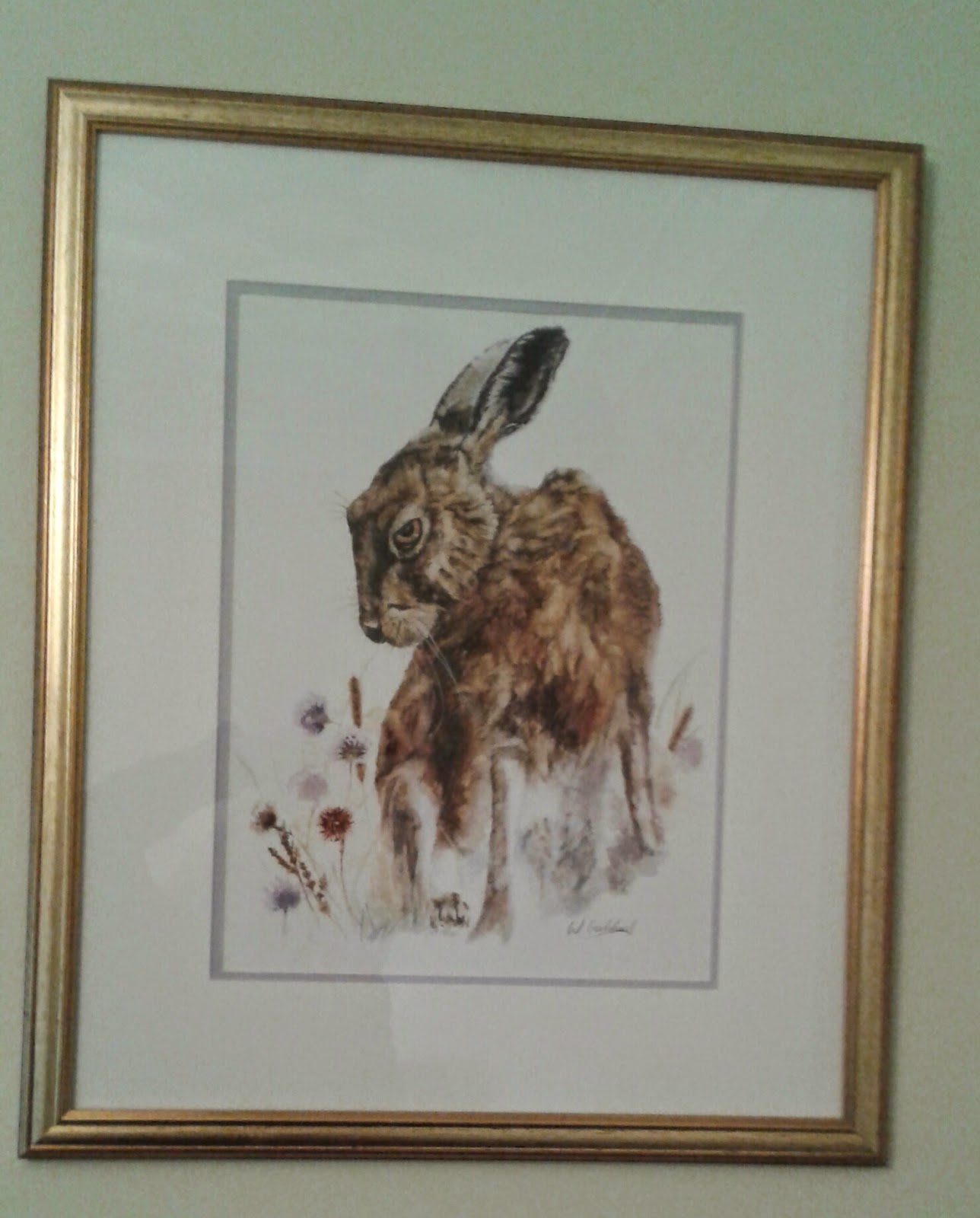 This was my Christmas present. "March Hare" by William Goddard. The colour representation here does not do it credit. The inner mount is a pale heather colour to compliment the purple flowers - and the alium flowers of the curtains - and in the spring the 100 alium bulbs which will flower opposite the window. I have admired this picture for a few months - bought from The Stables gallery in Thornton-le-Dale.
The gallery couldn't tell me anything about the artist as it was bought by the previous owner - all we know is William Goddard has a Sheffield connection - so my research continues....so far despite endless google searches I have zero results!

This concludes the current ABC Wednesday round - next week brings Round 16!
Posted by mrsnesbitt at 09:35 15 comments: