Keep up with the Nesbitt’s.

The weather is really wonderful here right now........so we have grabbed some time and headed out to warm skies on the motorbike, warm sands with the dogs and are enjoying a few rare days together!

Oh yes- and I have continued my keep FIT campaign - am swimming half a mile, walking 3 miles and doing a gym session MOST days! Yes - am pretty worn out on the whole!
Normal service will resume when the weather deteriorates...........wont be long then!﻿ 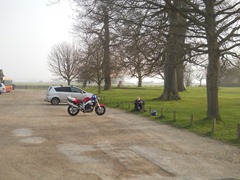 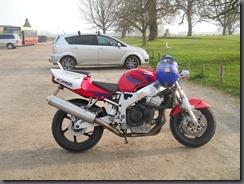 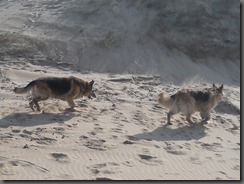 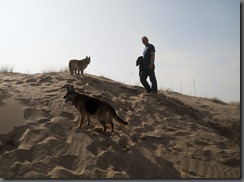 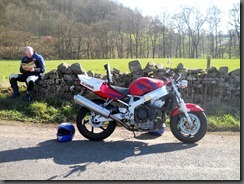 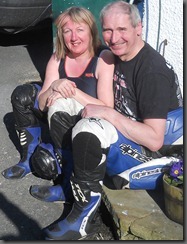 Foe more K adventures, follow the link in my sidebar!﻿
Posted by mrsnesbitt at 23:30 19 comments:

I is for Incentive! 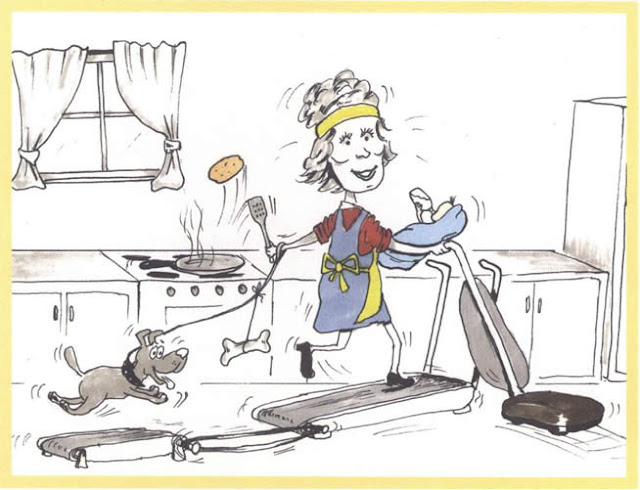 We have been making the most of the wonderful weather - hence my absence. Saturday saw us tootle down to Harrogate to see Dorothy and Keith, Sunday we went to a bikers cafe near Leeds. Today we went to Barnard Castle.....where I was measured up for my new bike leathers. My current ones are now far too big, apart from looking a site really they are not all that safe. The armour patches are not stable due to the fit being baggy.
The lady who measured me was very good - obviously she is well experienced and familiar with customers whims etc. She commented on my small hands and feet and used the word petite.........just for my hands and feet I presume!!!!! But it did make me think that whilst I have lost 2 stone I am getting nearer to a more desired weight.....
The leather will be ordered in - the same blue as Jon's and in about 6 weeks the cutting will commence. So.....in 6 weeks time the measurements will be checked!
A good opportunity for a determined, focus on achieving a better result. The wine has gone on hold and tomorrow I will commence my fitness regime. I am OK with the diet side of matters - but the keep fit business has to be started!
Watch this space!

For more ABC fun visit the link on my sidebar
Posted by mrsnesbitt at 19:38 23 comments:

View from our window 3 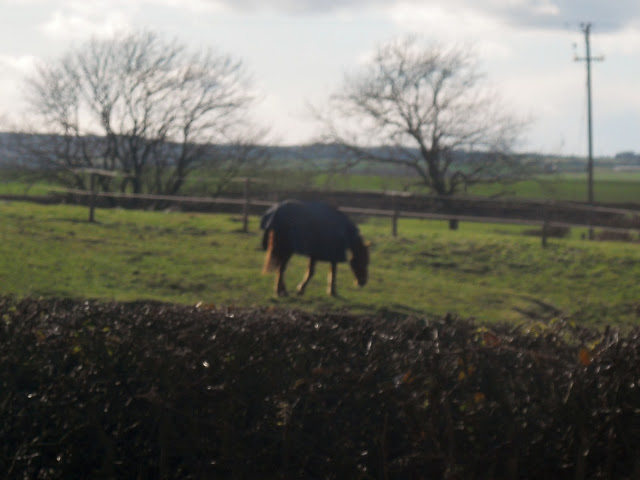 Looking out from the kitchen window I can see Hamish, my neighbours horse 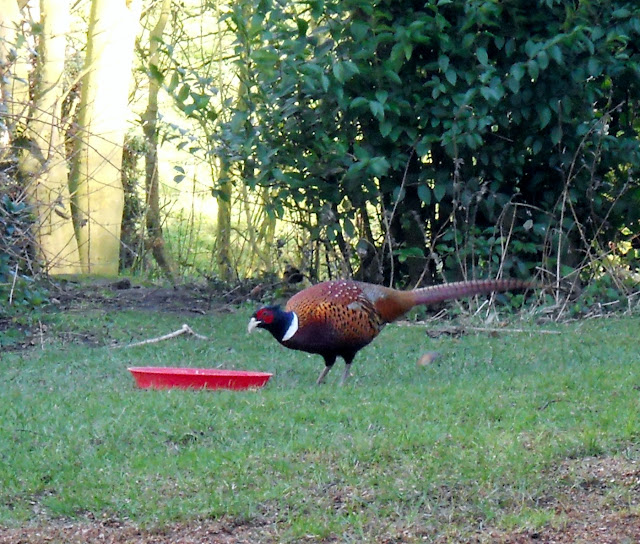 From the back window, I can see our latest visitor!

Good news on the henfront - a blue egg was amongst the daily collection this morning - Bev is laying again, bringing our hens to full capacity. 6 hens, 6 eggs every day!

Labels: Chickens, hens, View from my window
Email ThisBlogThis!Share to TwitterShare to FacebookShare to Pinterest

Vintage is THE in-thing at the moment so I am tootling around with some HEART  ideas for my latest wedding commission. This is what I have so far.......but early days yet.
The weather has vastly improved, hopefully allowing us to get out in the garden soon - but we are on our final room downstairs now.....it is the Hall and yes, we will be using Farrow & Ball's Hound flat emulsion!
Watch this space........next week I am hoping it will be I for IMPRESSED!
For more ABC fun visit the link on my sidebar.
Posted by mrsnesbitt at 12:09 15 comments:

Whether the weather be fine, 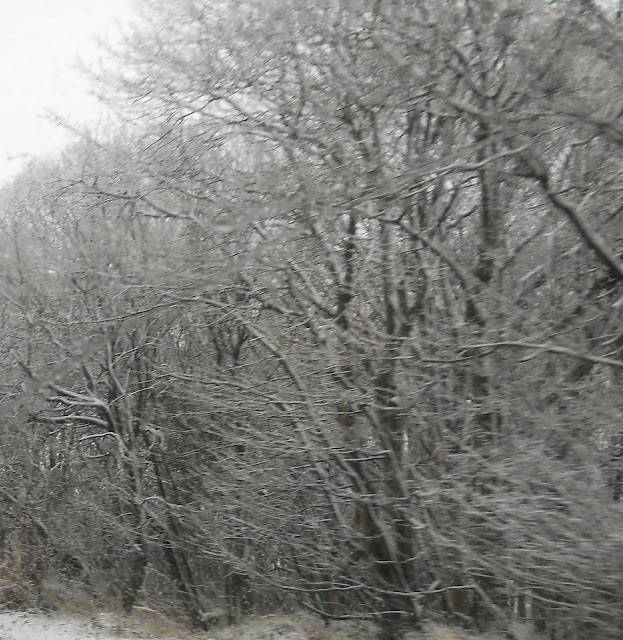 Or whether the weather be not, 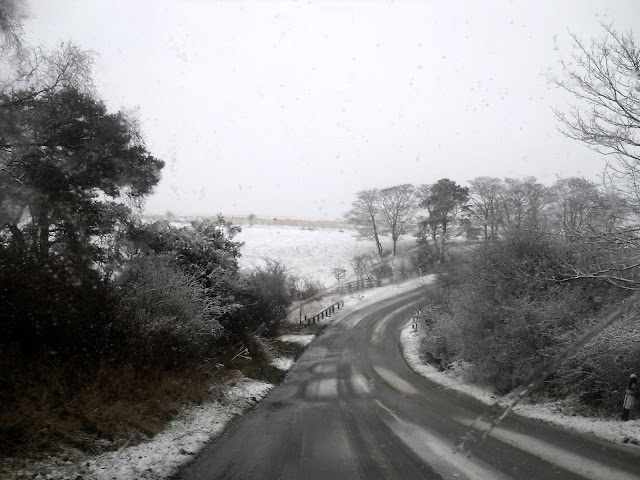 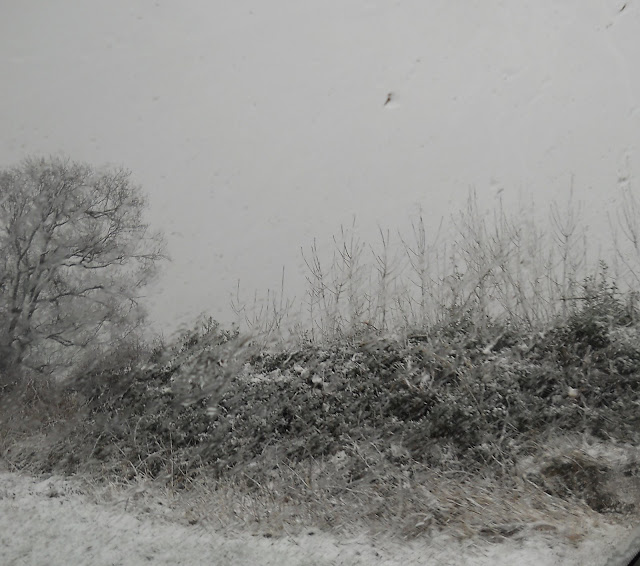 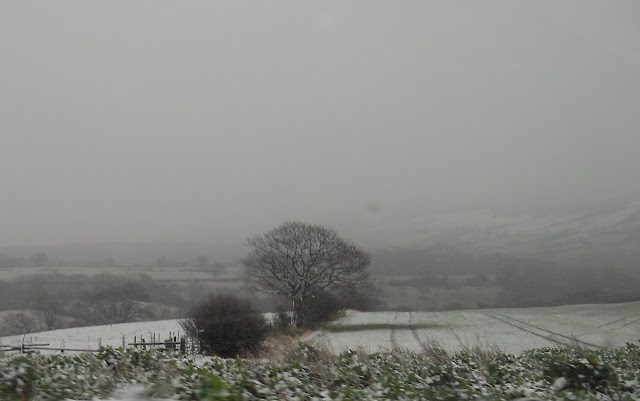 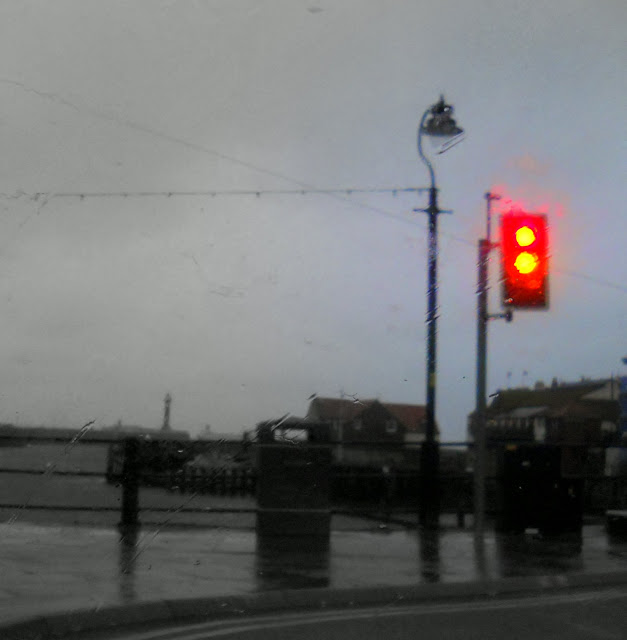 As we have had some lovely weather this week  I decided it was time to swap our winter duvet for our summer one........how wrong could I have been!
This morning the weather deteriorated and the snow started falling - then laying!
We tootled over the Moors to Jill and Phil's for a cuppa.
Home via Whitby and the inevitable fish and chips!
Did you see snow?
Posted by mrsnesbitt at 19:18 18 comments:

Saturday afternoon and the weather is awful! Then......the post arrives and it is a lovely card from Bob's mum..(now my new header! followed by an e-mail arrives from my neighbour - had to share! Hope it brings a smile ot two!

DIFFERENT WAYS OF LOOKING AT THINGS

Bill said, 'I didn't sleep with my wife before we got married, did you?'

Larry replied, 'I'm not sure, what was her maiden name?'

A little boy went up to his father and asked: 'Dad, where did my intelligence come from?'

The father replied. 'Well, son, you must have got it from your mother, cause I still have mine.'

'Mr. Clark, I have reviewed this case very carefully,' the divorce Court

'That's very fair, your honour,' the husband said. 'And every now and

Then I'll try to send her a few bucks myself.'

A doctor examining a woman who had been rushed to the Emergency Room,

Took the husband aside, and said, 'I don't like the looks of your wife at all.'

'Me neither doc,' said the husband. 'But she's a great cook and really good with the kids.'

An old man goes to the Wizard to ask him if he can remove a curse he has been living with for the last 40 years.

The Wizard says, 'Maybe, but you will have to tell me the exact words that were used to put the curse on you.'

The old man says without hesitation, 'I now pronounce you man and wife.'


A blonde calls Delta Airlines and asks, 'Can you tell me how long it'll take to fly from San Francisco to New York City ?'

The agent replies, 'Just a minute.'

'Thank you,' the blonde says, and hangs up.

Two Mexican detectives were investigating the murder of Juan Gonzalez.

'How was he killed?' asked one detective.

'With a golf gun,' the other detective replied.

Moe: 'My wife got me to believe in religion.'

Moe: 'Yeah. Until I married her I didn't believe in Hell.'

A man is recovering from surgery when the Surgical Nurse appears and asks him how he is feeling.

'I'm O. K. But I didn't like the four letter-words the doctor used in surgery,' he answered.

'What did he say,' asked the nurse.

While shopping for vacation clothes, my husband and I passed a display of bathing suits. It had been at least ten years and twenty pounds since

I had even considered buying a bathing suit, so I sought my husband's advice.

'Better get a bikini,' he replied. 'You'd never get it all in one.'

The graveside service just barely finished, when there was massive bolt of lightning, followed by a tremendous clap of thunder, accompanied by

Even more thunder rumbling in the distance...

The little old man looked at the pastor and calmly said, 'Well, she's there.'
Posted by mrsnesbitt at 12:31 14 comments:

Labels: Fun
Email ThisBlogThis!Share to TwitterShare to FacebookShare to Pinterest

View from my Window!

Different window - front of the kitchen!
( Thankyou hens for illustrating a little poem I found!)
Look Back, Around and Ahead 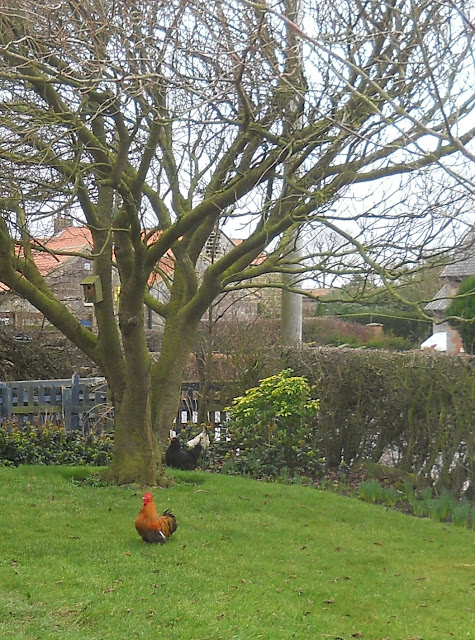 Don't look back with guilt or regret. 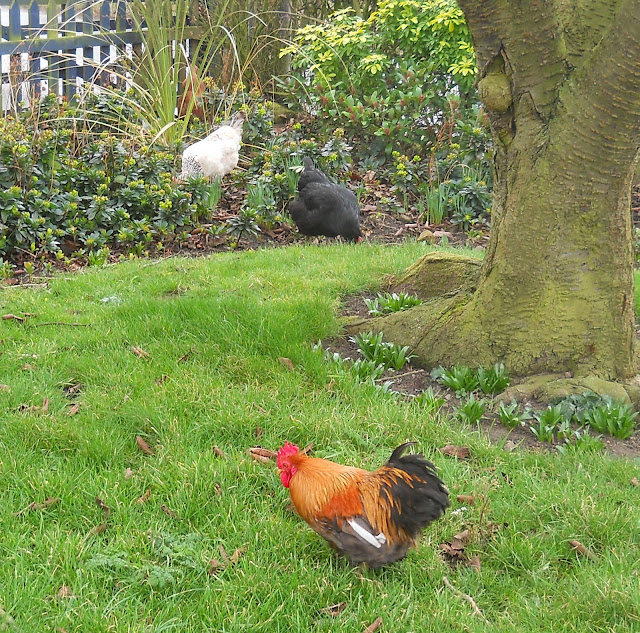 Look back with appreciation. 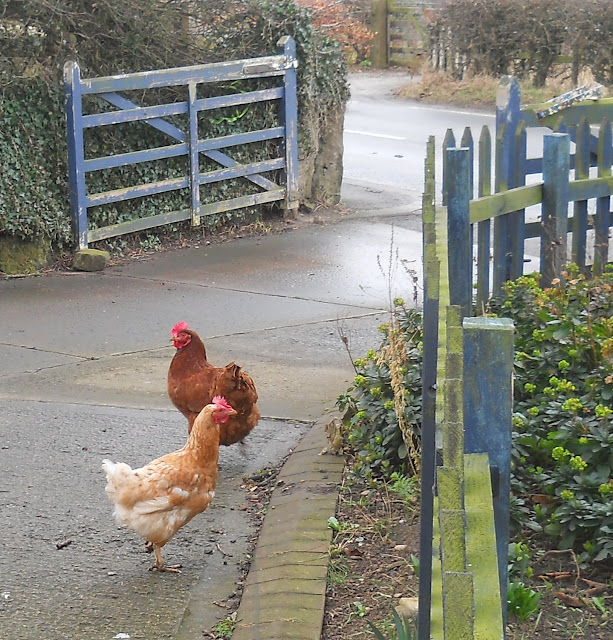 Don't look around to blame or compare. 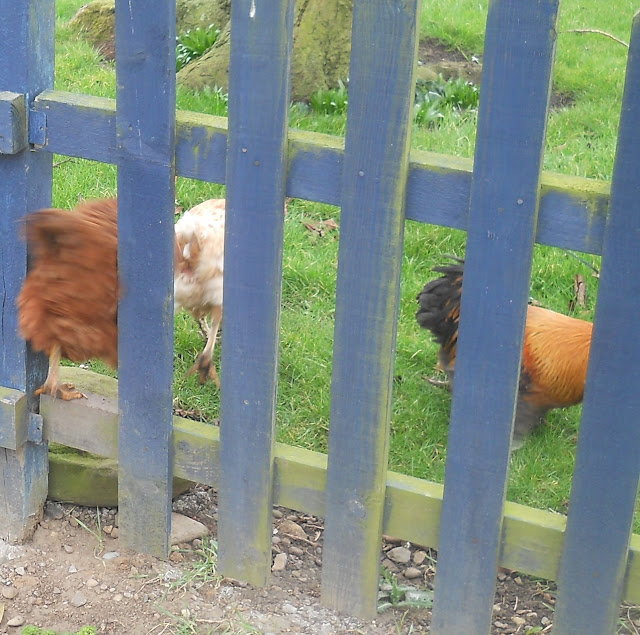 Look around with admiration and acceptance. 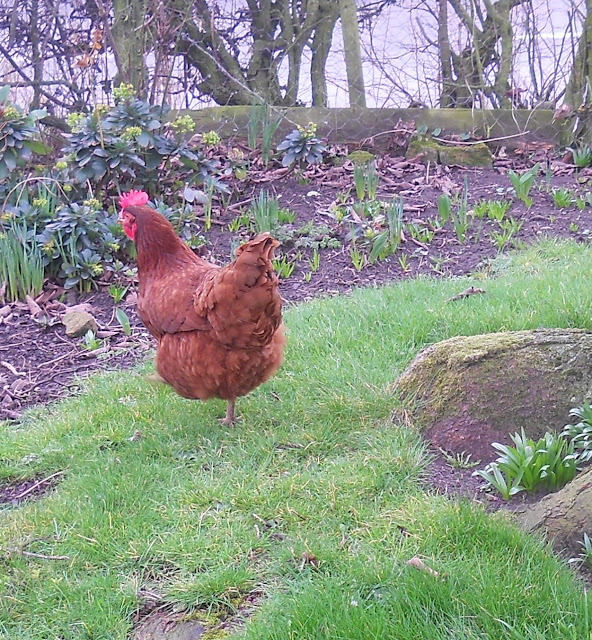 Don't look ahead in fear. 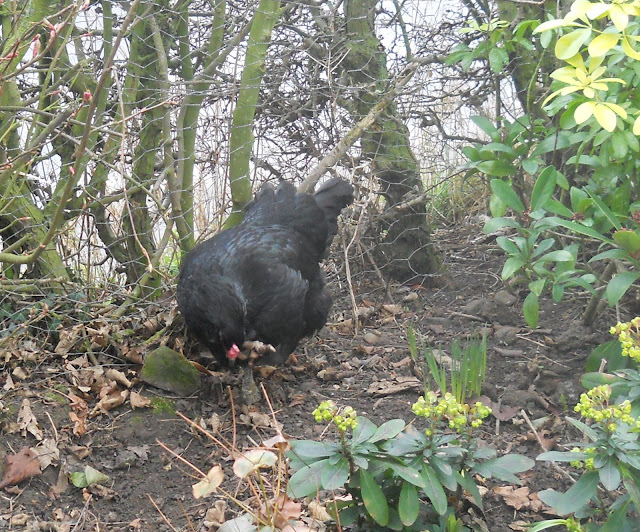 Look ahead with purpose and hope.
For more views visit here
Posted by mrsnesbitt at 09:44 11 comments: