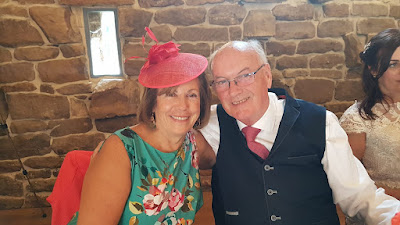 Anne and Glyn have lived in the village for a year now. When the previous neighbours moved out and I saw that the new people had moved in I took a welcome card to give to them. Glyn was on the drive and said that his wife was in the house and I should go and introduce myself, which I did. It turns out Anne and I have known each other from over 20 years ago when I was doing my wedding stationery and Anne had a shop selling fascinators and hats so we would meet up at various networking events and wedding fayres.

It has been great to have good neighbours we had the neighbours from Hell for a couple of years but thank goodness they moved - they lived next door to Anne and Glyn! When Anne and Glyn first moved in and we realised we knew each other I didn't mention the neighbour from hell - a week or so after they moved in Anne invited me for a cuppa. As I walked over the threshold Anne said "Right, tell me about him next door!" Yes within their first few days he had caused problems - but as I said they have moved now no doubt causing problems! 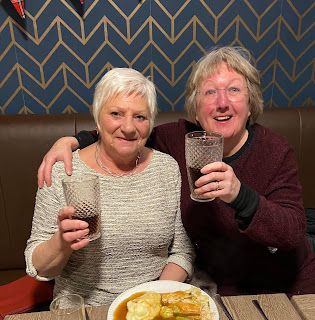 I have known Shirley for years - we met at pottery class. It was just a flash in the pan for me - pottery but Shirley still goes and has produced some amazing pots. Shirley and her family moved here again just over a year ago.

It will be great when we get back to the busy village hall events - just waiting for the AGM and we can get things moving!

Posted by mrsnesbitt at 18:40 No comments:

Everybody needs a Brenda! 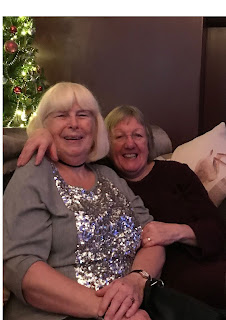 This is my friend Brenda. Many years ago I taught her nephew and when Jon was looking for somebody to sweep up at the workshop I suggested Chris. He swept up for Jon for over 5 years and when he applied for college Jon wrote him a reference.

We kept in touch with him long after he left college and often helped out in the workshop or with any projects Jon had on the go even though he was working fulltime. The family never forgot and so when his auntie moved to the area from West Yorkshire she made friends on Facebook and became a regular visitor at the workshop at a time when we were moving premises. Brenda became a great friend and I introduced her to Kitchen Therapy and Walking Footblall, she also loved helping out at the village hall.

Last year we were going away and she offered to look after our house, in particular to look after the dogs. Brenda not only kept all the dogs happy she hoovered every day and power-washed the patio!

This photo was taken over Christmas when we went for supper and drinks with Jacky and Keith. Anne and Glyn also went - Brenda is so kind and offered to taxi us all. Everybody needs a Brenda - but she's ours!

Tuesday - Zumba first thing with the gals. I drove this week so Anne and I travelled in together, meeting Jacky and Sharon there. I must admit I am getting "into" zumba as I become more familiar with the moves. Easington is a relatively new class, just a couple of miles away new faces too. Class is an hour with a period set aside for toning. Must admit I ached after last night's session - as did Anne so I am hoping it is doing some good. Last Friday I went to Walking Football. I hadn't been for quite a while following an injury I sustained during a session. It was quite severe and I had to go to physiotherapy for a few sessions, at my own expense. I had attended the sessions from day 1, encouraging others to go too - I was even instrumental in a bit of match making! (Still going strong and gloriously happy I add too!) As the group has grown and developed the pace of the game has increased as has the speed of the balls etc. I think my confidence and strength has decreased and I am thinking about not going for a while, sticking to zumba instead! Yes there were new faces there but with no proper introductions not many knew me. Let's see. When I was a Member Pioneer for the Co-op one thing I did learn was the roles we play when doing any community initiative/project. One important role is that of a "connector." We don't have to organise, manage and attend everything that comes along but we can "connect" I look at the people who I connected with and introduced to Walking Football, it now being an important part of their social life and I am happy with the part I played. They have grown and developed over the past year whilst I took time out. Maybes accept and move on Denise? Tuesday is also Slimming World and that means weigh in. I am 11 weeks into my target and let's just see what the scales say! Looking back at some photos I can see the difference and will continue with the regime! Chilli featured heavily this week due to a culinary incident in the kitchen. The good thing however is Jon is enjoying chilli soup!
Photos below 1993? 1996, 2002, the last one is me last Christmas. 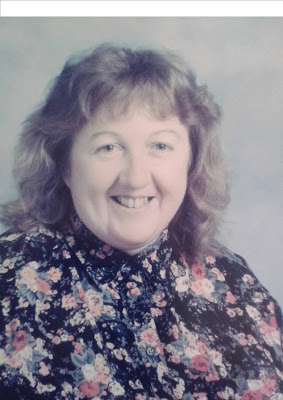 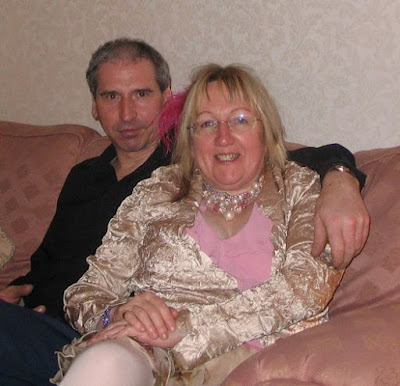 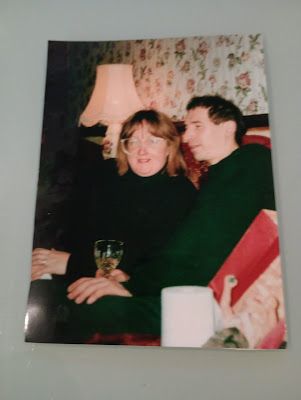 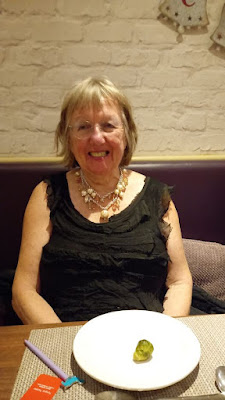