The view of the Moors on our way home today! 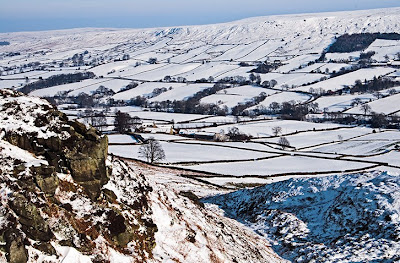 Well the weather forecast was correct yet again - down to the time of day we would get more snow! We had to go to County Durham today so we were keen to get any running around done - and we just did.
As we left the village this morning the fluttering snow stopped just after 11am and as we drove towards Durham the roads were clear.
Coming home however we could not get away from the fact that the area which seemed the worst hit was once again the North York Moors - indeed as we were driving home the all too sure signs of the effects of snow were all too clear. Cars, fearing for their traction were definately driving slower and as we watched on, clear roads were suddenly covered by the drifting snow off the moors. Apparantly this bout of snow is going to be worse than the last one due to the icy cold wind which as I speak, I can hear howling away outside.
I was listening to "Thought of the Day" the other morning on the Chris Evan's breakfast show. The pastor was talking about a journey she had made on a motorway, during the snow we had a few weeks ago.
As she approached a convoy of military vehicles - where we often see the brigades of servicemen in the rear, instead this convoy was transporting shepherds, together with their sheepdogs. What a sight that must have been at this time of year! The army have indeed being active in rescuing many rural communities, people and animals alike.
All the sheep in our village farms are now inside the barns and outbuildings - we hear them as we lay in bed as we are just over the road from Ronnie, a sheep farmer. Let us hope the winter conditions are not too devestating for the farmers and sheep alike.
I enjoy Radio 2, but my big favourite is Classic FM. One of my all time favourite christmas music was played today and it did make me think about what is going on around us.
Christmas music is so moving, no matter what your preference don't you think - do you have a favourite piece/carol?