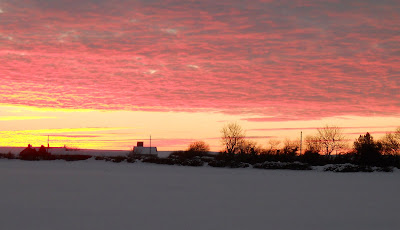 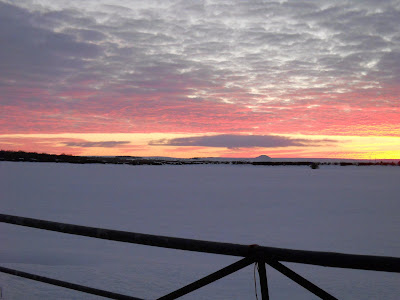 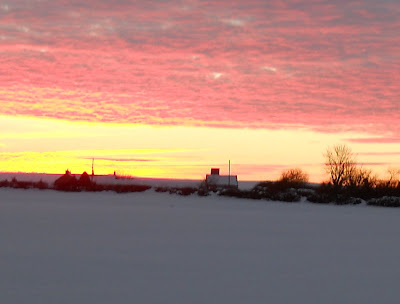 Last night, from the various sounds coming from the roof, it would seem we are in for a thaw. The weather forecasts have been very accurate so far so it is with a heavy heart I read that we are due for another dose of snow next week.

We live just off the A171 Whitby coast road and it has certainly been in the news this week, in particular on Tuesday. Jon and I had to go to Guisborough and as we set out it started to snow - nothing drastic - just a steady even fluttering.

We weren't long in Guisborough and coming home the snow started to lay thicker and heavier. Now the A171 is an unforgiving road with many blind bends and hidden summits. It is important not to brake unecessarlily as this can lead to skidding and there are many ditches along the side.

One of the dangers on the moor road is drifting snow. One minute you are looking at white fields on either side of the road - the next the wind carries the snow across the road which suddenly is not visible and you are surrounded by a vast whiteness - yet you know the ditches are there!

As we use the road daily we are aware of the many blackspots - so as we left Birk Brow and headed down the sloping road the car in front was indicating left. The car began to turn left, then changed its mind and reversed back onto the main road, straight into our path. Now this junction is a notorious black spot - indeed it claimed the life of our neighbour some years ago and I always think of Peter everytime I pass.
Jon was driving and by his quick thinking swerved round the car and carried on. Fortunately nothing was coming toward us!

The snow was pelting down by this time and as cars in front of us drove cautiously towards Whitby we eventually turned left towards our village. The road was barely visible but we managed to get to Jon's workshop and on the way home came across a vehicle which could not get over the brow of a slight hill in the road. It was still snowing heavily but Jon stopped and towed the car over the brow and onto a part of the road where the driver could carry on. Would you believe we knew the driver? His dad was our best man! lol!

Shortly afterwards the roads were closed. Mayhem! There had been various accidents and incidents. If we had been any later we too would have been stranded for a few hours.
Our location leaves us with two routes - the moor road and the coast road. The coast road involves saltburn bank - to give you an idea of the adverse conditions we have had to dope with here is a video of Saltburn Bank taken last week. The coach driver now has his own following!