Friday 55 Flash Fiction is brought to you by G-man (Mr Knowitall). The idea is you write a story in exactly 55 words. If you want to take part pop over and let G-man know when you've posted your 55. Here is mine for this week!

Interests include his family, home and garden.

Endearing sense of humour and a very generous nature,

Looking after all around him.

Answers to the name of John Henry Davison, Dad.

The greatest gift I ever received come from God, I call him Dad! - Anonymous


John Henry Davison came into my life when I was 7. Mum had just got a new job at the prestigious ICI, Wilton Training Centre. One of the Training officers was John Davison, or Jack as he was known. Mum was one of the secretaries. This was her first job following the harrowing divorce she had gone through, a visit from the bailiffs to strip the house we lived in, seizing goods to cover my biological father's bankrupted business debts, a nervous breakdown.

Mum borrowed the deposit for a small terraced house from her 2 brothers, Uncle Bob and Uncle Stan. It needed lots doing to it, including total rewiring. We all know how single women are targeted by unscrupulous workmen, and back in the 1960's things were no different, so Jack helped Mum by making sure she was not taken for a ride. He also helped where he could, as electrics were his "thing!"

The very first time he came to our house I was introduced to "Uncle Jack!" Years later I learned he had been more nervous than me! I was playing with my doll's house.
He spent time talking to me and I liked him. He re-wired my doll's house, I had the best there was! Independent switches in each of the rooms, as a real house would.

Over the years a friendship developed and he would visit us every Saturday. It was quite a treck for him as he did not drive and travelled from just outside Guisborough.

Mum eventually introduced him to her own parents.
My Grandad, a man of few words took him out for a walk! He wanted to know his intentions as Mum had been through so much.
Jack assured him he had her and mine best interests at heart.
Grandad was re-assured and a great friendship was kindled between them.

On one of his visits as Jack sat with Nana who was quite ill. Nana drew him close and asked him to promise he would look after Madge and Denise....he promised.
On June 17th, 1970, Nana died.
On November 1st Uncle Jack and mum were married, the day before mum's birthday.

We moved to a bungalow and after a couple of years we all moved to Guisborough,
Dad's home. Mum and I loved this change although by this time I was at University.

Mum and Dad were both still working at ICI. Dad had a very stressful job and in 1983 he suffered a massive heart attack. It resulted in him having to stop work.
In those days ICI was one of the best emloyers, with very good benefits, both Dad and Mum left with "Golden Handshakes", mum deciding to leave in order to ensure Dad had the rest he was to need.

Happy with their bungalow in Guisborough, they bought a static caravan at Rosedale Abbey. They loved to visit and stay whenever they had the time. Infact, the photograph above was indeed taken in the caravan, by mum.

On the morning of August 13th 1986, whilst staying at the caravan, Dad told mum he would prefer go home. He wasn't feeling very well. They had planned on going to Danby Country Show, one of their all time favourites.

They packed up and set off for home. It would have been a very busy day on the roads, due to holiday traffic, -the Whitby to Guisborough Road in particular!

As the car passed Gisborough Hall, Dad brought the car to a stop and slumped forward.
He had died, literaly at the wheel.

I was teaching in Nottingham at the time.
I received the news later that afternoon and returned home the following day.

This was to be a turning point in my life. I was to return home and look after mum.
I had a fantastic relationship with Dad, he was indeed my Dad.

Notice how he suddenly evolved as Dad from Uncle Jack? It was the same in our relationship.
I don't know when it happened, it just did. One day I just called him Dad!
Dad recounted the event to mum..he had cried at the time, privately, with pride and love.
I often sit in Dad's chair and remember him....I will take great comfort in doing that today, August 13th 2010! 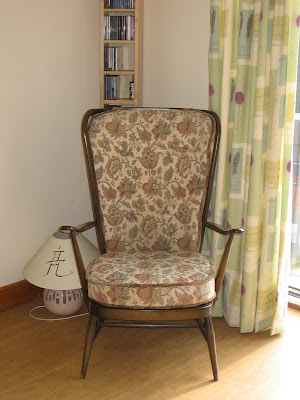 When Dad was at school he learned the poem " Meg Merilles" off by heart. This he would recite when his teacher asked the class to stand up, one by one and sing. Dad was incredibly shy as well as tone deaf, this was his contribution. he often recited this, infact at the drop of a hat!

Here is the poem in it's original form, for Dad!

Old Meg she was a gypsy; And liv'd upon the moors:
Her bed it was the brown heath turf, And her house was out of doors.
Her apples were swart blackberries, Her currants, pods o' broom;
Her wine was dew of the wild white rose, Her book a church-yard tomb.

Her brothers were the craggy hills, Her sisters larchen trees;
Alone with her great family She liv'd as she did please.
No breakfast had she many a morn, No dinner many a noon,
And 'stead of supper she would stare Full hard against the moon.

But every morn, of woodbine fresh She made her garlanding,
And every night the dark glen yew She wove, and she would sing.
nd with her fingers old and brown She plaited mats o' rushes,
And gave them to the cottagers She met among the bushes.

Old Meg was brave as Margaret Queen, And tall as Amazon:
An old red blanket cloak she wore, A chip hat had she on.
God rest her aged bones somewhere — She died full long agone!

John Keats
Posted by mrsnesbitt at 00:27