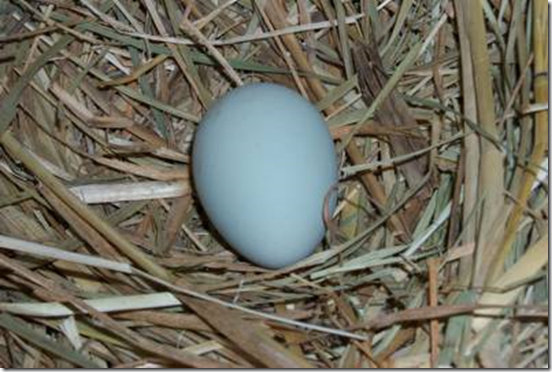 This morning when I let the chickens out I noticed a pale blue egg! This means that Bev has started laying again after her broody period. I knew she would eventually start laying again but was a bit concerned that the attitude of the other hens towards her would put her off, but it would seem things are getting back to normal! The bullying has settled down but she does tend to keep herself to herself! This morning I fed them their favourite treat, cooked boiled rice mixed in with their layers pellets and some grit! 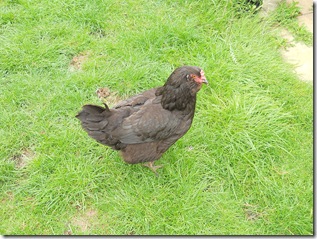 On a small farm just over the hill there lived a farmer named Farmer. He took some kidding about his name, but not much, mostly because he didn't talk to many folks. He lived alone with his wife, Mrs. Farmer, whom he loved very much. And they had a chicken, whom he also decided he loved very much.
"I love this chicken," he said to his wife one day."Yes, I love her too," said the wife. "She's a nice chicken." "By cracky, I'm going to write a love poem for her." "I'm not so sure people should write love poems for chickens," she warned, but his mind was already made up.
Mr. Farmer worked on his poem for an hour. He had never written a poem before, so he didn't know how bad this one was. It went:

Roses are red,
Violets are blue,
You're a great chicken,
Cock-a-doodle-doo.

He thought it was good enough, and he wrote it out in his best handwriting and brought it to the chicken early the next morning, and set it down in front of her so she could read it.
The chicken looked at the poem with one eye, then the other. Then she hopped on the paper and scratched with her talons, until it was nothing but shreds. The farmer frowned and walked away silently.
He was downhearted, but Farmers don't give up so easy. He said to his wife, "I love this chicken."
"Yes, I love her too," said the wife. "She's a nice chicken."
"By golly, I'm going to write a love poem for her."
"But you did that already, and she scratched it up."
"That just means my poem wasn't good enough. I'll write a better poem."
"I'm still not sure people should write love poems for chickens," she warned, but his mind was already made up.
Mr. Farmer worked on this new poem for five hours. He had only ever written one poem before, so he didn't know how mediocre this one was. It went:

Dearest chicken, lovely bird,
Love is not too strong a word
For the way I feel for you,
And hope you feel it for me too.
I love you more than I can say,
And even more each passing day.

He wrote it out as before, and brought it to the chicken early the next morning. He set it down before her, anxiously watching for some sign of approval.
The chicken stared at the poem for a second. Then she pecked at it. And pecked again and again, poking holes in the paper until every word was obliterated. The farmer grimaced and walked away, choking back a sob.
But a Farmer does not admit defeat so readily. He said to his wife, "I love this chicken."
"Yes, I love her too," said the wife. "She's a nice chicken."
"By God, I'm going to write a love poem for her."
"But you did that twice already, and she tore 'em both up."
"That just means they weren't good enough. I'll write a better poem."
"I'm pretty sure people shouldn't write love poems for chickens," she scolded, but his mind was already made up.
Mr. Farmer worked on this third poem for three whole days. He had only ever written two poems before, so he didn't know how good this one was. It was, in point of fact, the greatest love poem ever written by anyone in the whole history of poetry. It went:

As grains in the cornfield, for thee have I shucked,
Words of love do I offer, yea of praise and renown,
Winged yet earthbound, as seraphs cast down,
To thee have I whisper'd, to me hast thou clucked.
Pulchritudinous poultry, from beak to thy legs,
To gaze at thy galliform soul is to sing
Of the unbested arm and the untested wing;
I toast thy fowl beauty as I toast thy fresh eggs.
Say not love is folly 'twixt chickens and men;
For hath not my heart forged a bond with thy breast?
Yea, a thick bond, which thickens, like mud in a nest,
And quickens my pulse for thou pullet, thou hen.
O chicken, surpassing the swallow or dove,
As thou swallow my corn, spurn not my love.

He finished writing it just as the sun came up on the third day. He brought it to the chicken, and bowed low as he placed the parchment before her.
The chicken looked at the poem for almost a minute. Then she clucked musically, and the farmer's heart filled with joy.
Then she turned around, and pooped right onto the sonnet. She defecated again, and again, until every word was smothered in chicken droppings. Mr. Farmer stumbled back to the house. He could barely see for the tears in his eyes.

That night, he said to his wife, "I love this chicken."
"Mmm, so do I," she agreed. "May I have the other drumstick?"