D is for Dairy Cow!

We learn something new every day don't we? Well yesterday I learned that the Dairy cows I pass when Freida and I go up Handale are of the breed Holstein, typical black and white colouring. They belong to our neighbours, Blue House Farm. I asked Sue what the colored tape was on the bottom of the cow's tail and she told me the various colours indicate how often the cow gives milk and of any antibiotics the animal may be taking. I found this quite interesting really and now you know too! lol! 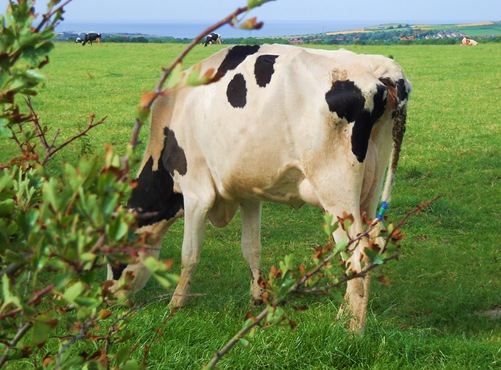 In this photograph in the background is the North Sea, so you can appreciate how close we are to the sea. 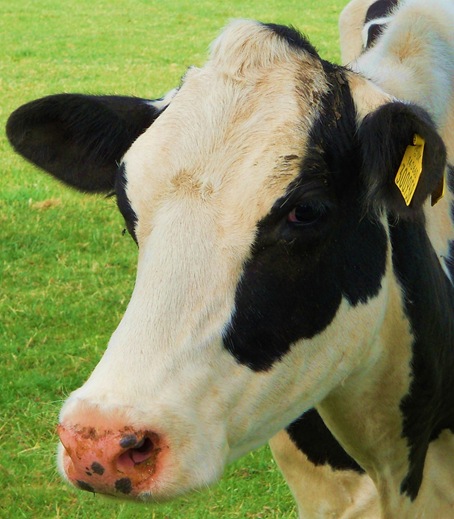 In the ear of the cow is a tag so the milk produced by each cow can always be traced. Each cow has a name and it amazes me that Sue and Phil, infact all of the family can identify the various cows in the herd! I find cows such lovely animals and would make such a lovely subject for a painting...now there's an idea! 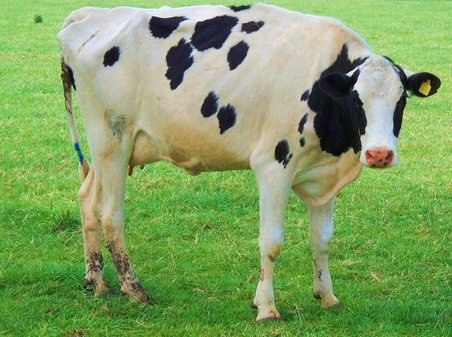 The main function of a dairy cow is to produce milk. In the UK & Ireland and many countries across the world, the Holstein is the predominant breed because of its ability to produce high volumes of milk efficiently.

Calves can be born throughout the year, unlike e.g. sheep where lambs are usually born in the spring. When the calf has been born, the mother licks it to remove the birth fluids. The calf is able to stand within a few hours of birth and will drink colostrum from the cow’s udder. Colostrum is a special milk produced for the first 24 hours or so after birth and protects the new-born calf from disease.
In modern farming systems the calf is taken from its mother within a couple of days as she is needed to produce milk for sale and it is less stressfull for both the mother and calf. The farmer feeds the calf milk from a bucket for the next 6-8 weeks until it is weaned (can survive on solid food).
The calf must, by law, be identified with a tag which is inserted into its ear shortly after birth. Calves may be dehorned when they are a few weeks old. This procedure does not hurt the calf but stops the horns from developing and causing possible injury to other animals or humans.
Bull (male) calves are usually reared for beef either on the farm or at another farm which specialises in beef production. In exceptional cases where the bull is of superior genetic merit, it may be used for breeding. Heifer (female) calves usually stay on the farm and are reared for entry into the milking portion of the herd.

Before a heifer can produce milk she must have a calf. Heifers are mated at 18-24 months old. Artificial insemination is the usual method although natural service may be used. If all goes according to plan, the heifer will be pregnant for nine months before giving birth. Once the heifer has given birth she will begin to produce milk. (She will be called a heifer until she has her second calf when she will be called a cow). Milk is removed from the heifer using a electricity-powered milking machine which mimics the natural sucking action of the calf. The milking machine has a ‘cluster’ of four rubber cups which are attached to the heifer’s four teats. Gentle suction is applied to the teats and the milk is drained into a system of pipes leading to a refrigerated tank where the milk is stored until it is collected by a tanker, usually once a day. The herd is usually milked twice or occasionally three times a day.

Ideally the cow should calve once a year. Because the gestation period (pregnancy) is nine months, this means that the cow needs to be mated three months after she had her last calf. The cow continues to produce milk throughout most of her pregnancy until about three months before she is due to calve when she is ‘dried off’ i.e. the farmer stops milking her. This allows her to rest and be ready for her next lactation (milk producing period). The lactation period lasts for about 305 days. If a cow does not calve every year, the amount of milk that she produces will gradually get less.
In her lifetime, a cow will have on average, 4 calves and 4 lactations.

In order to be able to produce milk, the cow must eat large quantities of food and drink large volumes of water to obtain the nutrients that she needs. The cow is a ruminant which means that, unlike humans, she can make use of fibrous foods such as grass. In the UK & Ireland, most grass grows in the months between March and November. The herd grazes outside during this period. Surplus grass is preserved for the winter months. The most common form of preservation is in the form of silage which is fermented grass. Drying grass in the sun is another method of preservation which produces hay. Cows will eat silage or hay in the period between October and April when they are kept indoors.
Because we expect the modern dairy cow to produce large volumes of milk, her grass-based diet needs to be supplemented with extra energy, protein, vitamins and minerals. Concentrates are used for this purpose. Concentrates are mixtures of cereals, rape meal, sunflower meal, peas, soya, vitamins, minerals etc which are ground and pressed in animal feed manufacturing mills to produce small, brown pellets.

P.S. Hen update - hmmmm seem to be kicking out the eggs. Sitting on 2 eggs now - will keep you posted!