Tuesday morning saw us drive over to the Forrestry Commission where our nephew 3 works. There were some recently felled trees which were available for a contribution to the "Friends" funds.
We received a pick up full together with some useful tips on chopping wood. Our neighbour chops wood regularly so when we basically asked him about using a chainsaw he said he would be round in a few minutes to show Jon how it was done! We had had a long busy day but were keen to deal with the trees - so last night Jon and Malcolm worked until 9pm. Anne and I moved the logs and stacked them so they could dry out for a year. 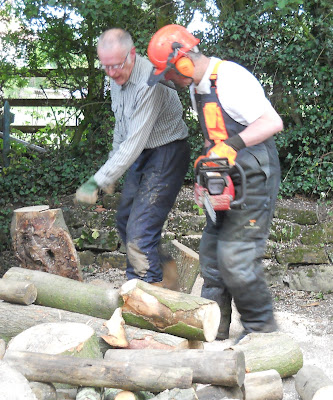 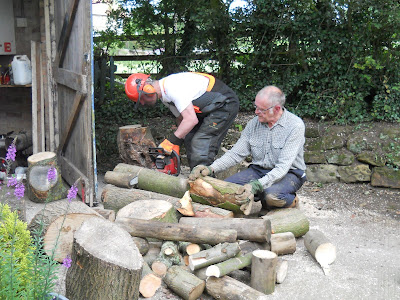 Believe me, we were exhausted last night and slept like logs! (groan)
We slept through the 7am alarm, rousing at about 7.40. The rayburn was to be delivered between 8am and 9am - so as we were both tired we said we would get up at 8! As I was just about to doze off for another few minutes I heard a van pull up outside our house - in our village we get to recognise the morning traffic - usually being Mick's tractor at 8am as he makes his way to Ronnie's farm. Yes - you've guessed - the Rayburn was early! We jumped out of bed and dressed as quickly as possible before flying down the stairs. 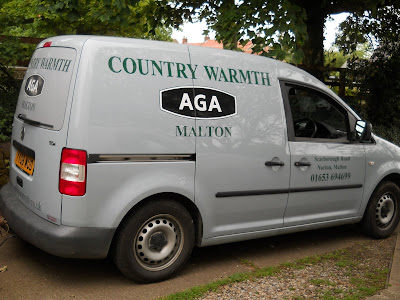 The Rayburn was moved to the garage where a couple of hours later a few pals and neighbours together with Jon, rope, trolley and roller negotiated the Rayburn into the kitchen. 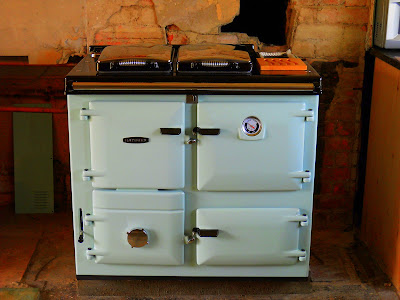 She (we have called her Sheba as in the arrival of the Queen of Sheba - as never in the history of the Nesbitt household has something been discussed and planned to this degree) now rests on her own concrete plinth, made by Jon's fair hands in the kitchen.
On Monday the heating engineer is coming to assess what needs to be done before we can fire her up and rock and roll!
I am quite exhausted but love it! The colour is wonderful don't you think?
Watch this space!
Posted by mrsnesbitt at 17:01

Labels: Rayburn
Email ThisBlogThis!Share to TwitterShare to FacebookShare to Pinterest