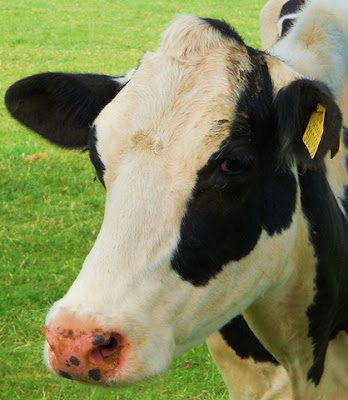 Yesterday I was driving out of the village when I came across some fine cows in the middle of the road. We have a traffic diversion at the moment due to some building work, so the traffic was busier than usual. The cows were making their way into a luscious arable field - where they were NOT suppose to be! However, due to a broken gate they could easily have come out of, back onto the main road. I was in the pick-up which is quite an intimidating size to a cow so thinking quickly, I pulled as near to the gate as possible and put on my hazard lights. I then phoned Jon - he worked on a farm as a boy - he'd know something!
In my mirror I saw a landrover approaching and recognised it to be a local farmer - he waved as he passed so I flashed my lights and he turned round. He knew whose cows they were so he made his way to tell the farmer involved.
Left alone, me, the pickup and the cows I became slightly concerned when they made their way back to the nearside of the vehicle! Fortunately at this moment Jon turned up, jumps out his van and "shoos" the cows back into the luscious field. I told him Mick had gone to the farm re the cows so all was OK. "If the cows come back just make yourself look big!" was his advice. A mean trick I thought, considering I am about 5'1" tall and there were about fifteen strapping cows! The cows seemed pre-occupied with eating the crops of the unfortunate arable farmer and I remained in the pick-up.
A few minutes passed and the tractor in the distance told me help was on its way in the form of John, the cows owner's son and my neighbour, Emma, his future sister in law. Off they went into the field, John doing a wonderful "one man and his cow" interpretation and with a series of whistles, swearing and mad antics, managed to persuade the cows to head for the road. Meanwhile as motorists were approaching the potentially dangerous situation (some at speed) I indicated for them to slow down so as not to freak the cows As the cows were brought up to the front of the pickup I  stopped the  traffic (no problem for a teacher) and ensuring the cows didn't go in the wrong direction waited whilst  John and Emma  brought the cows up, along the road, across the field and onwards to their own pastures! I must get the names of the cows involved - would you believe the same farmer showed one of his special cows at the Yorkshire Show last week! Her name - Denise!!!
Village life is never dull!
Posted by mrsnesbitt at 10:49