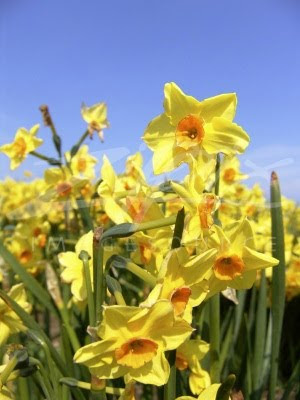 Yesterday we had to attend the funeral of a very dear friend, Christine who died last week as a result of a traffic accident whilst out on her motorbike. It was a freak accident really and could have happened to anybody, but sadly for us and all of Christine's family her number was up!

The service was to be held at our local church, All Saints in Easington. We knew there would be a lot of people attending the service as Chris was so popular. The church was absolutely full with a huge crowd of people standing as there wasn't any seats left. The service was to begin at 1.15pm and by 1pm the place was packed with many standing outside.

During the service we learned lots of facts about Christine, facts which we wouldn't have known. After the many years I have known Chris I did not know she not only loved poetry but wrote some herself. Her favourite poem was Wordsworth's Daffodils which we are all familiar with.

The poem 'Daffodils' is also known by the title 'I Wandered Lonely as a Cloud', a lyrical poem written by William Wordsworth in 1804. It was published in 1815 in 'Collected Poems' with four stanzas. William Wordsworth is a well-known romantic poet who believed in conveying simple and creative expressions through his poems. He had quoted, "Poetry is the spontaneous overflow of powerful feelings: it takes its origin from emotion recollected in tranquility". Thus, Daffodils is one of the most popular poems of the Romantic Age, unfolding the poet's excitement, love and praise for a field blossoming with daffodils.

William Wordsworth wrote Daffodils on a stormy day in spring, while walking along with his sister Dorothy near Ullswater Lake, in England. He imagined that the daffodils were dancing and invoking him to join and enjoy the breezy nature of the fields. Dorothy Wordsworth, the younger sister of William Wordsworth, found the poem so interesting that she took 'Daffodils' as the subject for her journal.


That floats on high o'er vales and hills,
When all at once I saw a crowd,
A host, of golden daffodils;
Beside the lake, beneath the trees,
Fluttering and dancing in the breeze.
Continuous as the stars that shine


And twinkle on the Milky Way,
They stretch'd in never-ending line
Along the margin of a bay:
Ten thousand saw I at a glance,
Tossing their heads in sprightly dance.
The waves beside them danced; but they


Out-did the sparkling waves in glee:
A poet could not but be gay,
In such a jocund company:
I gazed -- and gazed -- but little thought
What wealth the show to me had brought:
For oft, when on my couch I lie


In vacant or in pensive mood,
They flash upon that inward eye
Which is the bliss of solitude;
And then my heart with pleasure fills,
And dances with the daffodils.

It is such a shame that often we only discover things about people when it is too late to talk. I asked Jon if he had a favourite poem and he said whilst he wasn't a great lover of poetry he did like "If" by Rudyard Kipling. He went on to say that he didn't think it was appropriate for a funeral but I think it would be OK.

My favourite poem is by EE Cummings. I particularly like it for the words in the final line sum up the great feeling of walking on the beach and being so near to the sea. When I was teaching in Nottingham, in the East Midlands I often read this to my pupils and described the coastline I was brought up with which is now an important part of our walks and indeed we can see the North Sea from our house, so it is fitting!

maggie and milly and molly and may
by E. E. Cummings

and maggie discovered a shell that sang
so sweetly she couldn't remember her troubles,and

and molly was chased by a horrible thing
which raced sideways while blowing bubbles:and

may came home with a smooth round stone
as small as a world and as large as alone.

Do you have a favourite poem?