C is for Cockerel!

Following the ABC of the Nesbitt Chickens brings us to C  our cockerel,  Ernest. 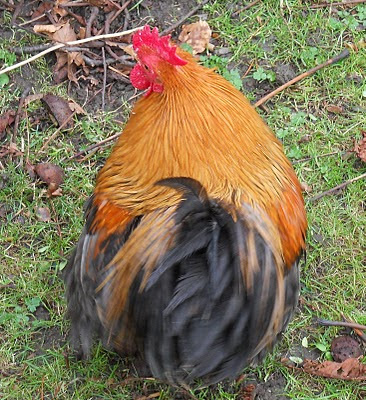 A common misconception is you need a cockerel if you want to keep chickens for eggs. Hens do not need a male around to lay eggs. Just as with human females, releasing an egg and having a period, female chickens do not need a cockerel to produce an egg. It happens whether or not there is a male around, the only difference is that it won't be fertilised if there is no male.

In the past, in fact when we first kept chickens back in 1990 we did have a cockerel and went through the whole experience of raising chicks. The cockerel we had back then was named Maurice and he had 2 hens for company - and other favours (wink wink!) This increased to about 10 and then he became quite rough with the girls and he had to be dealt with!

When we decided to keep chickens again we decided against a cockerel. A couple of years ago our neighbours borrowed Mabel and Bev - who at the time were broody. Their own eggs were not fertile so they were given some fertile eggs to hatch. Bev lost interest and walked away from the eggs but Mabel stayed and indeed hatched a chick. Sadly the chick died in the snow but Mabel meanwhile had developed a bond with the young bantam cockerel. This bond lasted a few months and when our neighbours moved from the village they asked us if we would keep the cockerel - who was "in a relationship" with Mabel. Being a Bantam (banty) he is small, so not large enough to properly mate with the hens so any fertilisation can not take place, we don't have the worry of raising the chicks and both the hens and Ernest are happy.

Like all our chickens he has a proper name, Ernest was the middle name of the neighbour who gave him to us. 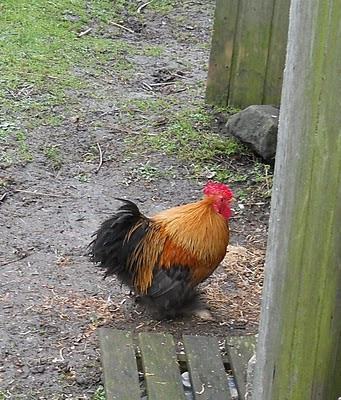 Ernest is a faithful soul and when Mabel goes into the hen house to lay an egg he will wait outside. The cockerel is often portrayed as crowing at the break of dawn ("cock-a-doodle-doo") Ernest can often be seen sitting on fence posts or other objects, where he crows to proclaim his territory. However, this idea is more romantic than real, as a cockerel can and will crow at any time of the day. Ernest usually starts crowing at about 5am in the morning and we hear him throughout the day - not too much and in any case things like this are tolerated here in the village. Ernest has several other calls as well, and can cluck, similar to the hen. One particular sound he makes which I find endearing is his patterned series of clucks to attract hens to a source of food, the same way a mother hen does for her chicks. When I feed the chickens with tit-bits Ernest will call the hens over to share anything he has obtained. A lovely way with his girls I would like to think!
Posted by mrsnesbitt at 18:07