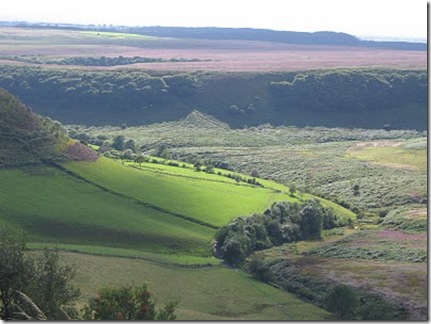 Whenever I am out and about I like to think what I can post for my weekly ABC Wednesday and as H approached it was perfect for the Hole of Horcum, an area of outstanding beauty not far away on the Whitby to Pickering road. We travel on this road almost weekly and I had been watching the changing colour of the Heather – knowing it is always at its best at the end of August/beginning of September! The photograph above is one I took in 2003 but the rest of the images were taken last week, 1st September. 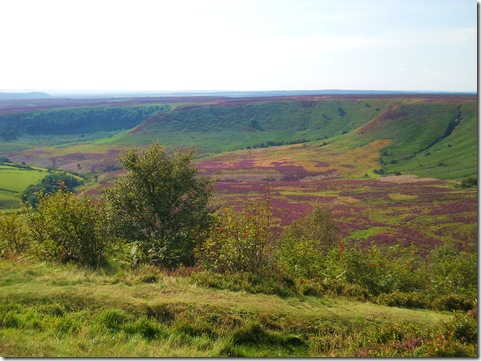 We found ourselves with a free afternoon and with the weather being good we decided to go out for a tootle on the motorbike. I knew exactly where I wanted Jon to take me and so we headed up towards the Hole of Horcum. Just as we parked in the carpark the action kicked off with an ambulance with its blue light flashing pulled alongside us. 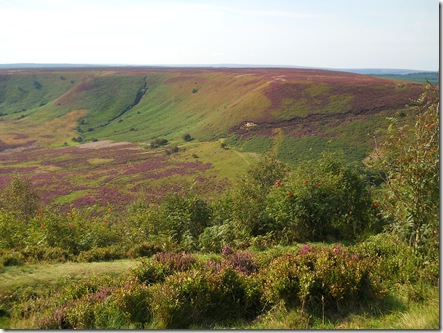 Apparantly a lady had collapsed right at the bottom of the valley and needed to be taken to hospital. The words “Air Ambulance” were mentioned so we knew a Helicopter was on its way! We sat patiently, enjoying an icecream and eventually the helicoptor arrived.

I took several photographs but I think the one below captured the moment! The lady was fine and I was well pleased with the extra H for my planned Hole of Horcum idea. We headed home and would you believe as we travelled through Danby a hedgehog crossed the road! The moment was witnessed by both Jon and myself but there was not time to photograph the incident!

The Hole of Horcum is a massive natural amphitheatre that was carved out of the rock of the North Yorkshire Moors by the action of glacial ice flows - an interesting place in itself but also the location of much activity during the prehistoric period. It is situated at the western end of the ancient trackway known as the 'Old Wife's Way' which leads east towards Blakey Topping and it is also the location of several Bronze Age round barrows, dykes and settlement sites further to the southwest on Levisham Moor.
Gallows Dike consists of a 3 metre wide and roughly 2 metre deep ditch with eroded 4 metre wide banks on either side that runs roughly north-south over a small raised section of land close to a kink in the A169 road on Saltergate Moor. There are 3 round barrows close by and it is possible that as well as being burial monuments they could also have served as territorial markers - they are probably slightly later in date than the bank and ditches. There are also several cross dykes running northwest to southeast further to the southwest beyond the Hole of Horcum and these also have round barrows nearby or associated with them. A much damaged series of banks and ditches known as Horcum Dikes also run north-south along the east side of the glacial hollow.
To the southwest of Levisham Moor there are several burial mounds and further later Iron Age earthworks, there are also associated field systems and enclosed settlement areas, one of which showed evidence of being involved in iron making and thought to have been in use well into the Roman period.
Posted by mrsnesbitt at 16:49