R is for Rice Pudding - My version. 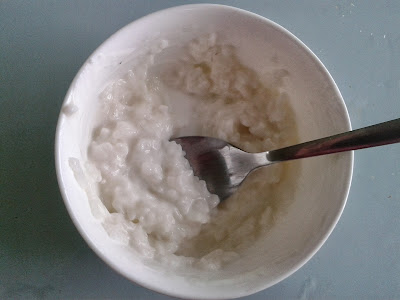 One thing which never ceases to amaze me at Slimming World is the originality and strangeness of some of the recipes. I wonder who on earth puts some of the ingredients together?
I was experimenting with a Rice Pudding recipe - using cream soda. One of the gals had tried it out and thought it was too sweet and sickly - so I tried my own take on it, but using lemonade instead of cream soda. I didn't have any pudding rice so tried long grain rice. Basically I put some rice into a microwave dish and topped up with a can of diet lemonade. Microwaved on full power for 10 minutes and checked to see the lemonade had not dried up. I added another can and microwaved for a further 10 minutes then left to stand for 10 minutes then stirred in a tablespoon of crème fraiche. Tasted absolutely gorgeous. Comfort food in a matter of minutes. Tip - use a large microwave dish as the lemonade rises a lot!
This is my T contribution for ABC Wednesday - I am really enjoying this round.
Posted by mrsnesbitt at 14:27