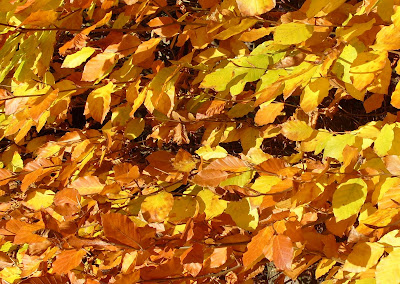 I love Autumn! Walking round the garden this afternoon I became aware as I always do at this time of year, of the beautiful colours nature keeps for this time of the year.
In the shrubbery in the middle of the back lawn, a yellow rose has climbed high above the trees and shrubs to glow such a wonderful shade of yellow.

This is not a miracle, it is the yellow rose I planted in mum's memory...tomorrow, November 2nd would have been her birthday. It would have been Wilma's too. We do not know the exact date Wilma was born, but we know it was the beginning of November, so we thought it would be fitting to use November 2nd.

Over the past few days we have been thinking a great deal about Wilma and the journry we took together.
Wilma was 5 months old when we adopted her from German Shepherd rescue, Newcastle.
To this day I can still picture both her and her sister in the pen, desperately trying to get away from the humans who were peering at them. They had been rescued from a shed in a back garden, strewn with broken glass and rubbish. For the first five months of their lives they had been kept alone, with no human or animal contact. They had no socialising skills at all. One of the pups was spoken so we said we would give a home to the other one, subject to a vet check on our sutability.

A couple of hours later as we walked through the door the phone was ringing to say the necessary vetting had been successful and a pup was ours. We jumped into the car and travelled back up to Newcastle returning home with our 5 month german shepherd.
Over supper we named her Wilmahah, a sound german name.

Wilma as she was to be called, soon found a corner of the kitchen where she felt safe, indeed spending 2 weeks there, nervously peeping round the corner now and again.
The first few weeks saw her finding the courage to venture into the lounge and immediately return to her corner. Eventually she built up her visits from a few minutes to a few hours and eventually would spend whole evenings with us.

Her stable, down to earth companion was Max who kept her on the right track. Jon spent hours upon hours with Wilma, teaching her how to play, fetch the ball and to have confidence and fun.

Wilma would never be a normal dog but we loved her and watched her grow in confidence.
She would always be nervous about people and when we lost Max in 2006 we brought Elsie into the Nesbitt household. Looking back it was a mistake but hindsight is a marvellous thing!

Although initially they got on fine something happened during the December and both became hostile towards one another. What sparked this off we will never know but one thought I have is Wilma had jumped at Elsie as she did with Max and this set the ball rolling for the many scraps which followed.

Life for the past 3 years has not been easy here. German Shepherds are a large breed and to have so much energy between two bitches was a nightmare. Yes both Jon and I "managed" the situation but it affected Wilma which saw her anger spilling over in a way we had never seen before. Whilst she doted on both Jon and I and our family and friends, many who visited here were not at ease.

Wilma and I spent a lot of time together, walking and playing and being in the home together. All would be well and at luchtime Jon would take her to the workshop, leaving Elsie with me.

So now Wilma is not here, now she has peace.
No more worry, she is in a place where she has salvation from the perils she faced here.

Elsie is missing her, she must be wondering what is going on but together we will go forward.

For the moment it will just be Elsie as the Nesbitt dog and we can get our home back on track and have some peace and quiet and live in a calm atmosphere! Well as calm as the Nesbitt household will ever be!
Posted by mrsnesbitt at 16:09

Labels: Day to day life in the Nesbitt household, Elsie, Wilma
Email ThisBlogThis!Share to TwitterShare to FacebookShare to Pinterest