Needed another adjective for accidental!
We became accidental hen keepers in 1991. It was a result of an accidental encounter with a neighbours hen by our border cillie Tess. To cut a long story short (which I will expand upon at a later date) we found ourselves owners of 2 hens, Madge and Mavis (named after our mums) and a cockerel Maurice (named after my uncle who drove trolley buses and frequently set his trousers on fire when he dropped his fag end in his bid to control the Austin A35. The hen keeping had begun and continued for some years. Careers and business interveened and we had a break from the chickens but in 2009 it rekindled. We were looking after our neighbours hens whilst they were on holiday and as a fee we were told we could eat the eggs. Any hen owner will tell you there is nothing like fresh eggs and once tasted our memories were evoked and we wanted some of the action and the hens were bought. 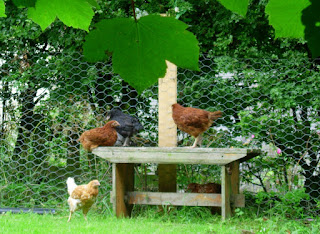 On the bench from the left, Mabel, Margie, Bev, Olwyn. Next to the bench May, Behind the bench Eva. We bought them from a local farmer when we collected them it was raining heavily and as we drove home in the pick up I kept looking in the mirror and seeing six little pairs of eyes peering out of the crate which the farmer had allowed us to borrow. I thought the best thing to do was to put the crate inside their new temporary house and open the lid, ensuring the house was secure. The following morning the hens were out of the box so we opened the roof and left them to their own devices. We kept checking on them every hour or so and each time we  could see they had gained more confidence as they became more familiar with their new surroundings. It wasn't long before 2 of them found a gap in the fence and made their way to the goose hut where they spent most of the morning. Later this afternoon they had worked out they wanted to be back with the others so we caught them and gently put them back, making sure the gap was sorted.

First Egg October 2009 When I went to clean out the henhouse I discovered the very first egg the girls had delivered for us. I was not sure who was responsible but suspected it was May. 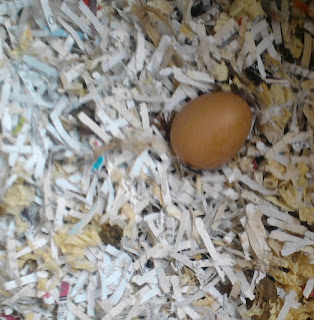 We did not eat it, though tempted, we marked it and left it in the nesting box to encourage the others to lay.
The hens were definately showing their personalities. First on the scene, front of the queue was always Little Eva followed by May. The two dominent ones were Mabel and Olwyn. When I would put them in for the night it was Mabel who would sleep in the tree if given half a chance. They both stretched their necks towards the tree when going in for the evening and I wonder if they are casing the joint for future escape plans! Margie and Bev were always the first into the henhouse and seem to be the most placid.
We were very happy with the way they are all getting along! Their favourite snack was to be the elderberries and the wind fallen apples. Seasonal gals.